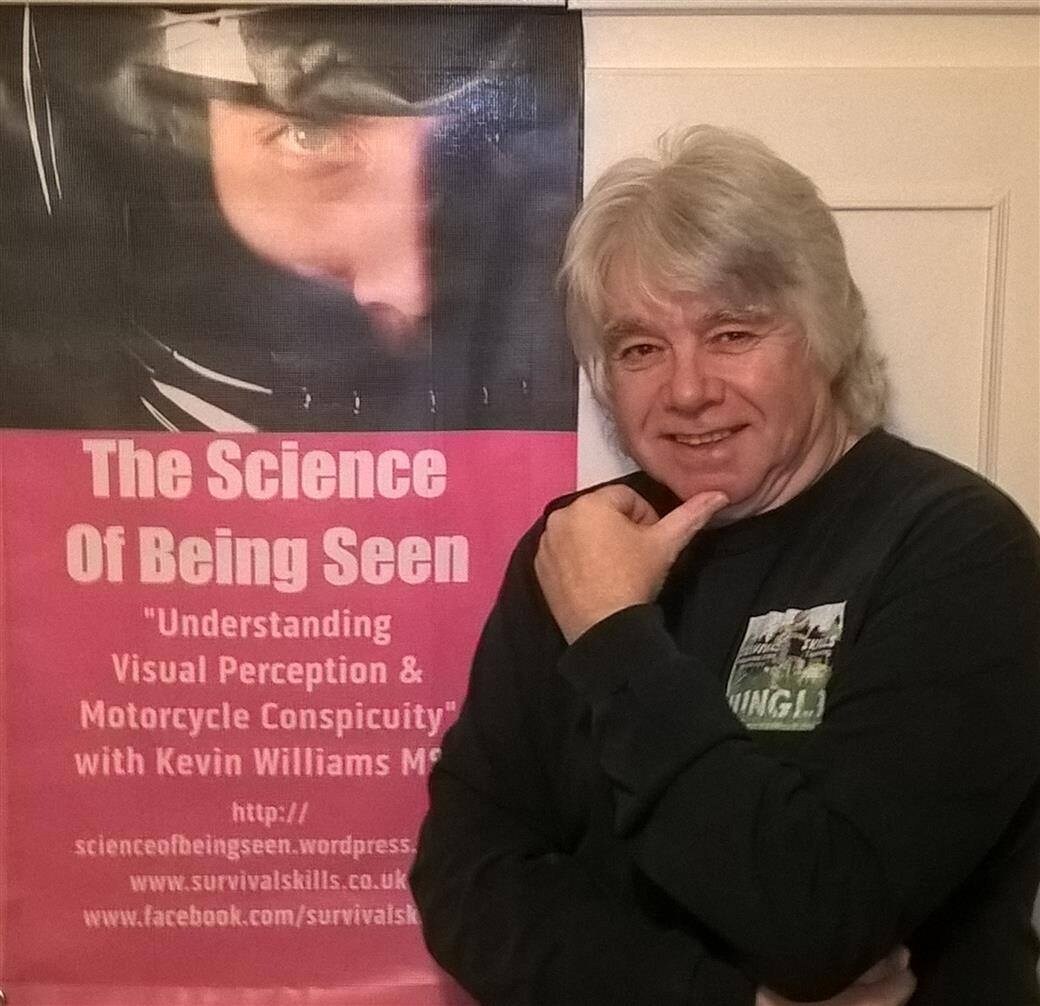 SCIENCE OF BEING SEEN (SOBS)

SOBS - WHAT IS IT? A magician knows that the 'world' we see has been built entirely inside our brains. The magician knows that the audience about to attend the magic show understands that they are going to be fooled, yet still can't spot the tricks. When we ride a motorcycle or a scooter, we become the magician and the drivers and other road users all around us are our audience. One of our magic powers is invisibility, but there are a couple of extra deceptions involved. Yet the motorcyclist isn't aware that he / she is a magician and about to fool the audience. And the motorcyclist's audience of drivers doesn't know the biker is a magician either.

The 'Science Of Being Seen' (SOBS) presentation is an in-depth investigation of the most common motorcycle crash of all - the 'Sorry Mate I Didn't See You' or 'SMIDSY' collision at junctions. We'll ask why drivers continue to fail to spot motorcycles, and why conspicuity aids have proven largely ineffective. We'll see how to use hi-vis clothing and day-riding lights more effectively, how to improve our night time conspicuity, and conclude by looking at pro-active riding strategies that reduce the risks of being caught out by someone else's error.

Based on decades of scientific research into these crashes, the webcast reveals the secrets of our very own motorcycling invisibility show.

SOBS HISTORY - the 'Science Of Being Seen' (SOBS) presentation was originally  written over the winter of 2011/12 as a proactive accident prevention module for the pilot 'Biker Down' courses developed by Kent Fire and Rescue Service. 'Biker Down' has since been picked up by most fire services in the UK as well as the UK military, and a version of SOBS was used by many Biker Down teams until 2020 - I personally delivered SOBS for KFRS at Rochester until the COVID crisis in March 2020.

AWARD WINNING - our 'Biker Down' team in Kent was awarded a Prince Michael of Kent International Road Safety Award at the end of 2012 and a insurance industry award in 2013.

GOING INTERNATIONAL - in 2018 and 2019 I took SOBS to New Zealand, as one of a team of international speakers on the nationwide Shiny Side Up rider safety initiative. We travelled around the country to visit over a dozen venues on each occasion. I reprised the role as a virtual speaker in 2021.

In 2020, SOBS was broadcast to viewers worldwide as one of the presentations featured on the US-based REVVtalks series of better biking webinars from riding experts around the world. SOBS was also a featured presentation in the spring 2021 RoadSafetyGB 'Powered Two Wheeler' safety week.

And of course, since 2012 I have been delivering SOBS to clubs and rider groups around the UK, both in person and most recently via Zoom.

SCIENCE-BASED - SOBS was created to solve a practical riding problem - the SMIDSY collision - but is based firmly on scientific research. SOBS is regularly updated as new studies emerge - the talk has been only recently been updated to reflect new studies on lighting arrangements and the 'looked, saw but forgot' theory that appeared in the literature as recently as 2018. Find all the latest news at the free-to-access website at www.scienceofbeingseen.org - each topic is supported by references to available research, a body of data extending back to the 1970s.

AIDE-MEMOIRE - there's a short paperback book to act as a reminder to the presentation - the cost is £9.99 . SOBS is also available as an ebook download.

SOBS receives no funding and remains entirely self-funded. All income from sales is ploughed back into website hosting, further research and writing.

TICKETS ARE JUST £5. Attendance is limited to 30 people per event.
YOUR ACCESS CODE WILL BE EMAILED TO YOU APPROXIMATELY 24 HOURS BEFORE THE EVENT.